I’ve been spending a lot of time, lately (well I should say a lot *more* time, really) reading books on habits and learning and thinking about how what I’m reading and learning applies to teaching and progress in general. After presenting on learning styles, and getting the first draft of a paper on feedback in, I have really started missing the day to day reality of teaching, and the opportunity teachers have to watch (and aid) the sort of small victories that gradually grow into big changes.

Those small steps to big changes come up in “The Power of Habit” by Charles Duhigg. This book seems especially relevant right now because it deals with habits in three different areas: individual, corporate, and societal and lets its readers understand how habits exist on micro and macro levels. This is not a self-help book (although it does address (and follow up in the appendix) some methods that readers might use on their own habits or goals), instead Duhigg spends significant time explaining, from current research and historical perspective, how habits work–giving those who read it the understanding that enables change, instead of instructions on what to do–instructions that can’t cover for every eventuality and therefore might fall down at crucial moments.

That, in fact, is one of the key take aways from the book.  Habits are not changed by knowing a magic formula (although understanding the “habit loop” will help) or by sheer will power (although, again, knowing how will power can be affected by effort will help); habits are changed through an understanding of how they work and a series of small successes over the obstacles that can derail the best efforts. Duhigg works to make sure his readers understand the process of habit forming–something that I have found myself recently focusing on when talking about teaching and learning.

As exam season approaches, I’ve  been giving a few talks on learning styles (and study skills) around the Uni (and to random people at the yard–I have a difficult time not teaching…), and one aspect I keep coming back to is that giving students an understanding of a process is often as important as helping them to understand content. Once students (or anyone!) understand how they learn best, they can not only seek out opportunities to learn but also are better prepared to compensate for anything that makes their learning more difficult.  Differentiated instruction is not just about preparing lessons that allow all students to learn, it is also about allowing students to take control of their own learning. END_OF_DOCUMENT_TOKEN_TO_BE_REPLACED

I really enjoyed Antwerp. Sometimes, when you go places for conferences (especially academic ones), you can end up far away from the city you are in, or so insanely busy that you rarely see more than whatever happens to be in between the hotel and the venue.

Antwerp was a great location for a conference.  The university it was held at is absolutely gorgeous (more pictures of that later), and the city itself is nicely navigable on foot, even for me (I can get lost on a straight line). There were also weird and wonderful things around nearly every corner from a printing museum (with the world’s oldest printing press!) to this bizarre combination of sculpture and science they had out on a side street. I couldn’t resist photographing it, but I really should have videoed.  There was steam shooting out bits and propellers spinning and just generally a lot of movement that the still photo doesn’t really capture well. It does look like something out of Scott Westerfeld’s steampunk adventures doesn’t it? It is almost too easy to imagine that it’s just one moment away from lifting up one of those spidery legs and skittering off down the street. END_OF_DOCUMENT_TOKEN_TO_BE_REPLACED 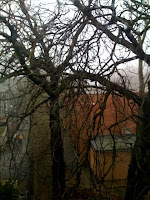 While trying to explain how very cool it is that Neil Gaiman won the Newbery (which mostly consisted of me naming other books and sighing: The Hero and The Crown! The Tale of Desperaux! The Witch of Blackbird Pond! A Wrinkle in Time!) I also starting blathering on about Coraline, another book of Gaiman’s that was very, very popular in my classroom. To begin with, it had the three magic elements that attract middle school ambivalent readers: it looked short; it looked scary; it looked simple. Of course, all of those things were merely ways into the book. Although it was short, the story it told was complete and felt world-shaping. Although it looked scary, it was really *creepy* (more on that later). And, although it looked simple, the story, and the conversations it prompted in my classroom, proved it was anything but.

My favourite conversation of all was between two of my most-anti-reading girls. After nearly two years with me (and improving their reading levels a LOT), they were now willing to read, but still very picky and demanding about the amount of effort they had to put into the process. These were girls who would rather read a “meh” book that demanded less of them than an excellent book they would have to work at. (Of course, they were also Twilight obsessed, but that’s a different story). Coraline, though, Coraline got passed around the group like some sort of trifecta pick: the teacher liked it, the students liked it, the parents liked it.

Why was that? Well, everyone comes to a book from a different place, but I think these girls liked Coraline because it felt like an adventure. Also, though, because (as I overheard one day… what? teachers are consummate eavesdroppers!)

Dude, Coraline isn’t SCARY. Scary is, like, Nightmare on Elm Street. Scary’s not REAL. Coraline is CREEPY. I kept thinking that if I opened the wrong door at my own house, I’d end up somewhere really not good.

So that was the magic then. These girls never really connected with Harry Potter, Frodo, or Merlin. Their lives were, quite frankly, too fraught with REAL danger to tolerate fantasy danger. But, they did connect with Coraline–the danger she faced, evil adults and world that made no sense, was something they felt was more real. It was creepy not scary. And they loved it.

Now, why they loved the completely unreal and unbelievably perfect Edward and Jacob is fodder for another post.

Don't worry, I haven't forgotten you. Just go to this new site, and you will find all of your poems and discussions still there. You should also stop here for a moment and say hi!